“Why is it that those who hold the Bible in high regard also tend to be those who are judgmental and self-righteous?” Eddie Chu

It’s a fair question. In fact, it sums up the dissatisfaction of many who have changed churches or left organized Christian religion altogether due to bigotry, with or without their faith intact.

The question arose in a discussion of a post of Eddie Chu’s on Medium, where I shared with Eddie some of my thoughts, but the more I thought about it, the more I felt it needed further elaboration.

In short: It comes from a combination of history, human nature, and perceived power/authority.

Consider the authority of the Bible. I remember the controversy over the Living Bible when it was first published. How could it be an authority? It was “just” a paraphrase. At that time, many “Bible Believers” were convinced that the KJV was the only authoritative Word of God. They couldn’t conceive that the English language had changed so much that they risked understanding it incorrectly. Add to that the uncertainties of original text ambiguities, the whole process of exegesis, and you get the debate over “infallibility”.

Never mind that the written Bible was originally available in Hebrew, (Old Testament) Greek (Old and New Testaments), and then Latin, long before the English KJV. Don’t forget languages like German, French, Russian Orthodox, etc. Are those without authority?

In English alone, there are many ways to say the same thing, but each may have its own nuance. Night, sundown, twilight, dusk, evening — can all pertain to the same time of day, with slightly different meaning. Unless you are from southern Mississippi like my husband, in which case “evening” means any time after noon, until it is full dark!

And that’s just English. Anyone who has studied another language has learned that others often have their own complications. Imagine, for example, trying to translate “white as snow” into a language that has no word for snow, because the people have never seen it. The typical arguments for infallibility slide over much of this.

People love black/white, yes/no, in/out, us/them. This is the root of bigotry. Once this helped for survival. Now, we’re lazy and don’t want to think for ourselves. Many of us, in fact, like being told what to do or not to do, because it makes life simple and can reduce anxiety. That’s why people are often happy to surrender to someone in authority to tell them how to run their lives. It’s why we tolerate corrupt politicians and status quos that are detrimental to us. Change is uncomfortable; our brains are hard-wired against it, hard-wired to take the easy route when faced with a lot of unknown.

So we accept people in authority telling us what the Bible says (or doesn’t say), instead of studying it out for ourselves. This is true across the spectrum. It’s much easier to find a Bible study curriculum that tells you what something means according to any given teacher or doctrine, than it is to find one that gives you tools to figure it out yourself. Besides, the latter requires effort.

This results in those who use the Bible to hit people over the head on issues they pick and choose to fit their views (and make themselves look good), as well as those who take a reactionary or apathetic approach and don’t see where it has any relevance. And all the in-betweens. We’re human.

The Pharisees and Sadducees were the “Evangelicals” of their day, debating fine points of the religious laws and parading their righteousness for all to see. Which is why Jesus kept emphasizing love. When asked what the most important law was, he said, “Love the Lord your God with all your heart, and with all your soul, and with all your strength, and with all your mind; and [love] your neighbor as yourself.” (Luke 10:27, Matt. 22:37-40)

With those words, Jesus yanked the rug out from under those who were immersed in arguments over whether it was legal to heal on the Sabbath, or what to wear. Or who looked down on those folks without the time or means to follow all the nit-picky rules that had been established to interpret the Law of Moses. Talk about rocking the boat!

And that’s why I shake my head when folks use Romans, for example, to argue against homosexuality. Paul was addressing customs associated with pagan gods. Don’t forget, he talked about eating meat — or not — too, in the same context. And he addressed the Hebrew Law, emphasizing how impossible it was. Funny how so many like to ignore Romans 8: “There is therefore, now, no condemnation for those who are in Christ Jesus.” Not to mention the end of that chapter: “ ….nor anything else in all creation, will be able to separate us from the love of God that is in Christ Jesus our Lord.”

And then there’s Galatians: “It is for freedom that Christ has set us free. Stand firm, then, and do not let yourselves be burdened again by the yoke of slavery.” (5:1, NIV) 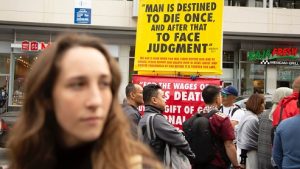 But we humans like our rules — not that I’ve seen anyone stoned for adultery around here, lately. (No, that vilification is saved for someone who is Pro-Choice, or just wants affordable reproductive control, or is LGBTQ+. )

Another aspect of human nature is to justify our views and actions after the fact.

For example, in the 1600s at the very beginning of the slave trade to the Americas, African slaves and indentured servants from England, Ireland, and Scotland, had the same legal status in the American colonies. The only difference was that indentured servants could eventually buy out. There was a clear hierarchy in that time, with aristocrats at the top and servants/slaves at the bottom.

As slavery became more common, and slaves became Christians, there had to be a reason for keeping them “other” to justify the practice of slavery. So pseudo-science declared Africans and their descendants non-human by the color of their skin. Some places even outlawed preaching and teaching Christianity to slaves as further reinforcement. Similar thinking created the caste system in India, and various class systems just about everywhere.

[Note: I find it fascinating that recent genetic studies have revealed that the lightening of skin color in northern climates by the reduction of melanin in the skin may have happened as little as 10,000 years ago. The genes of the earliest (so far) human found in Great Britain suggest he most likely had dark skin and blue eyes.]

This kind of Tribalism and Justification reasoning is why so many “Bible Believers” are against education, especially any curriculum that teaches critical thinking. Much of what they profess can’t be defended by science or logic. Both require examination and asking questions. Thinking. Those in authority want to maintain their authority, others simply don’t want their boats rocked.

I ask, what good is a faith that can’t be examined?

No, faith in God and in relationship to the Bible needn’t be an either/or proposition. One can certainly love the Bible, and study it, and NOT use it to beat down other people in any way. Nor need anyone insist it’s a scientific document. It’s not.

The Bible is a human record of God’s interaction with humanity.

And throughout human history, our understanding is colored by culture and human fallibility. The purpose of the Bible is to teach us who God is, and who we are in God’s eyes. One can also say that the Bible is True, but we don’t necessarily understand the Truth. The Bible, itself, is not God—nor is any interpretation of it, as some would make it.

Read the Bible, study it, and prayerfully ask, “What is God trying to teach me?” As a Christian, I start with the concept of Love as taught and exemplified by Jesus, and measure everything else to that. I ask the Holy Spirit to open my eyes and my understanding. Talk to others about it. Share insights and questions with one another.

And remember Grace. God’s grace to us and to all.