In What is Grace? Part 1, I discussed grace as being a facet or realization of divine, unconditional love. By that definition, grace is not limited to Christianity, but is evident in many traditions around the world. 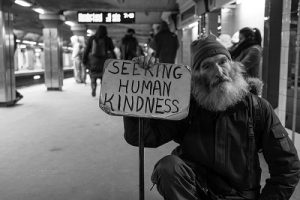 The next question becomes: What is our response? How do we live a life grounded in grace?

I’m a closet perfectionist. For years, my fear of failure kept me from trying new things. If I thought I couldn’t do something right on the first or second try, I wouldn’t even give it a go. I was afraid: what would people think? What if I couldn’t do it? What if I can’t get a A in that class?

Now I am learning that in grace, there is freedom to try new things. If I can’t make God love me less or more by what I do, I’m free to try, whether I fail or succeed.

For I am convinced that neither death nor life, neither angels nor demons, neither the present nor the future, nor any powers, neither height nor depth, nor anything else in all creation, will be able to separate us from the love of God that is in Christ Jesus our Lord. (NIV)

Do I want to make mistakes or mess up? No. But I am free to try new things without the fear that God is going to quit loving me. And a lot of the “oughttas, gottas, and shouldas” that ruled my life have been torn down.

And that leads to the next realization.

Grace with the world

This is hard for us, especially those who’ve been raised in traditions that perceive the world with an Us vs. Them dynamic. It is so much easier to hide behind words like “justice” and “immoral” and “sinner”. But if God doesn’t condemn me, who am I to condemn anyone else?

Many of the Eastern traditions as well as some Native American traditions have a better grasp of this. Rather than a hierarchical view of creation, their’s are more holistic and integrated. Each animal hunted, each seed planted is acknowledged to a higher power with gratitude and an understanding of inter-relationships that has been lost to western thinkers.

Ironically, it was my studies in the history of Missions that cracked open my thought processes. I learned about two types of missionaries: those who believed salvation was evidenced by outward cultural norms, and those who saw it as a spiritual matter that was life-changing; those who insisted on the “proper clothes” and those who let the people internalize the message and express it for themselves.

The changes in our society of the 1980’s and 1990’s hit me and my family as well. Suddenly, I looked around, and the world I had seen as very black & white was suddenly gray — everywhere.

Wounded and feeling abandoned, I began to try to make sense of it. At a retreat for “people in transition”, I was introduced to a book called The Artist’s Way, by Julia Cameron. In discussing the creative self inside everyone, she often quotes from scholars, religious people, pop culture icons and friends no one has heard of.

At a time when I couldn’t crack open a Bible without bursting into tears, I heard truth from Zen masters, celebrities and everyday Janes. The concepts were in the Bible, but I needed to hear them in a different language. And I came to realize that certain truths are universal.

One of those truths was grace. Another was that I can neither see nor judge the heart of another. Therefore, I can only treat people as I would want to be treated, or as Jesus would have treated them.

In encounters with a Samaritan woman at the well, blind men and a prostitute about to be stoned, Jesus addressed each one with respect and dignity. He met them face-to-face, not cloaked behind the trappings of authority or his position as a rabbi.

A friend of mine met Mother Teresa in Calcutta at her facility for the homeless. For the few minutes that she sat in her office, there were no interruptions, no phone ringing, no shuffling of papers or looking at the watch. Mother Teresa gave her full, undivided attention in a way my friend had never experienced before, as if they were the only two people in the world.

Often, it is the little things that can touch someone’s life in ways we might never see. A smile as you pass by someone on the sidewalk. The barista who pays for food and drink for the bag lady who talks to herself in her own world, so that she can have something besides water. Or letting the idiot in traffic–who waited until the last minute–merge in front of you. (I never said it was easy!)

Not long ago, a friend and I went to breakfast. As I waited behind a couple of elderly ladies to pay, there was a problem. The second woman’s credit card wouldn’t process. The clerk apologized; they’d had problems all morning. But the lady was extremely flustered and embarrassed. After the second fail, I double-checked my billfold. Yes! I had enough for hers and ours.

“I’ll cover it.” The clerk grinned and quickly re-rang for cash. After a few protests, I got hugs from her and her friend.

Now, don’t get the idea that I’m such a saint. I had ulterior motives — I had to go to the bathroom! But if I hadn’t been mindful of grace, I probably would’ve just gone to the bathroom and hoped she was gone when I returned. Instead, I had a chance to make her day, and the hugs made it mine, too!

When we look at people with grace, as worthy of dignity and unconditional love, we change, and the world around us changes. Not just the people, but the earth herself as we see the inter-connections.

I confess, I’m not very good at this grace thing. But I’m glad I named my blog Grace by the Cup. It keeps me focused on this journey as a process. And the importance of taking time to sit down with others over a cup of coffee or tea to share our hard-earned wisdom and learn from one another.