The American Dream is dead. That’s what we’re hearing, from blue-collar workers to university professors to immigration lawyers. Is it really? Certainly, it’s become harder to immigrate to this country. And it’s also become harder to achieve home-ownership, living debt free and retiring comfortably. And the news constantly bombards us with pictures of angry, disenfranchised folks of all colors. So, what is going on?

Much depends on how you define the American Dream.

The founding fathers described it thus:

We hold these truths to be self-evident, that all men are created equal, that they are endowed by their Creator with certain unalienable Rights, that among these are Life, Liberty and the pursuit of Happiness.

As the structure of our country was designed and built, ideas like the right to own land and to vote were considered intrinsic to the basic Rights. People came from around the globe, some as a trickle, some in waves to be part of the grand experiment of equality. Often they were met by hostility, only to become in turn hostile to those who followed. The English didn’t like the Scots or Irish, the Irish looked down on the Italians and Portuguese, and everyone looked down on the Jewish and non-Jewish refugees of Russian and the Eastern Europe. But eventually, most groups were more or less assimilated into the country and into the Dream, with two great exceptions: Africans/African-Americans and women.

But the Horatio Algiers pattern was set into the American Mythos: any man, no matter how poor, could work hard to “make something” of himself and acquire — if not great wealth — at least a comfortable living, to support a wife and family on his own land in his own home. My Great-grandfather C. was an example of this form of the Dream. From the Chicago area, he went West. He homesteaded in what is now eastern Washington State, then Montana, went bust and back to Washington State, and finally back to Montana where he gradually bought hundreds of acres of ranchland and a three story house with a ballroom!

While the Great Depression hit it hard, and WWII forced austerity, the Dream lived on and boomed in the post WWII Era. A house in the suburbs, a car in the garage and college for the kids became the new incarnation. But the very dynamics that brought this idea of economic prosperity to the forefront of the Dream also nurtured the seeds of its possible destruction.

More than radio, television impacted society in ways no one could have imagined. For the first time, people saw the American Dream in their own living rooms. Few of us had Ozzie and Harriet lives, but suddenly we knew what it was “supposed to be”. TV also brought us the reality of war with Vietnam, and the discomfort of responsibility.

Commercialism paid for the media, and consumerism became the backbone of the economy. While big tobacco understood this drive early on, one of the best examples was the frenzy over the Cabbage Patch doll. Suddenly, people HAD to HAVE certain things for no reason than someone on TV told them so. Meanwhile, other changes were happening, particularly in manufacturing. As people had more leisure and money, they wanted to live healthy and travel. Pressure to improve the environment and preserve unique and wild lands grew. Corporations began to buy up farmland to maximize scale for growing demand.

The two groups that had been left behind before WWII began to stretch their wings in the late 1950s and 1960s. Automation and birth control changed the playing field for women, and educated women began entering the workforce in droves. Those who chose to stay at home had more time to think, and acted on their musings. African-Americans saw the disparity between their lives and what was portrayed on TV and cried foul. They demanded a more even playing field and — to some extent — got it, with forced integration of schools and quotas.  There was just one problem: a significant — and growing — segment of the population was feeling like the rug had been pulled out from under them.

Even as women and African-Americans entered new areas of the workforce and began reaching for the Dream, many jobs began moving overseas or disappearing altogether. Suddenly, it seemed, white males, mostly blue-collar or rural, were feeling the pressure. They had to compete for the Dream with people their fathers didn’t. There were the refugees from SE Asia, and Hispanics from Mexico and Central America and former Soviet Block countries. That these people often worked jobs the white males wouldn’t touch didn’t matter. “They” became a threat to the Dream, and fear turned to anger.

The fear and anger are largely misplaced. The money hasn’t been going to the immigrants, or even the women and African Americans. It goes to the corporations and the top tier who control them. And we’ve all bought into the system.

In 1983, while studying in Ecuador, I was told that the U.S. didn’t have politics, merely economics. I disagreed then, but now I understand. The original idea of the Dream, of owning land to governing one’s own destiny, was predicated on one glaring misconception: that of unlimited land and resources. Capitalism as we know it ignores this reality. One could argue that Ronald Reagan’s trickle-down economics propelled us to the current dilemma, but I won’t, as it’s too complicated for that. We the people bought into the idea that IRAs and 401Ks were great replacements for retirement plans. Yet we are so removed from the decision process, that the very companies we might be invested in are buying up our employers and turning us out of jobs. Worse, we have let corporations and their representatives buy and sell the very people who are supposed to be representing us in government.

Even when faced with evidence of vote buying, we won’t vote them out, for fear of our state “losing influence.” I live in oil and gas country. My neighbor confessed that she voted for Donald Trump even though she despised the man, because she was afraid of an economic downturn in the industry if a Democrat went in. Economics. In cities like Seattle and San Francisco, where high paying tech jobs are king, so are the rents and housing costs. How do you achieve the Dream if you have to pay half your salary for rent? More economics. And don’t get me started on health care.

In essence, Capitalism as practiced in America is a great ponzi scheme. I call the baby boomers the Transition Generation, because the front end of the generation “made it” perhaps better than any previously. Just look at the retirement complexes, the travel programs and such aimed at that group. Those of us on the tail end are facing the real possibility of no Social Security, no Medicare, no retirement. And those who follow after? As the gap between the rich (top 2-5% depending on your source) and the bottom widens while squeezing the middle out, and as the smallest percentage controls the greatest amount of wealth, the probability of upheaval rises.

For the Founding Fathers, their protest was against a physically distant government and a stratified social system based on paternal lines. Right now, the lines are more or less drawn along outdated notions of race and heritage, when it’s more simply a matter of the Haves and the Have Nots. But it won’t take much for folks to start fighting like strays over picked-over bones.

The American Dream, defined economically along lines of property and wealth is dead. I believe it was doomed from the beginning in a world of finite resources.

What about the American Dream of equality, of life and liberty and the pursuit of happiness? That depends. Are we, as a people willing to put that Dream ahead of personal gain? Do we define happiness as the things we possess or something else? Are we, as a community, willing to put ideals ahead of manufactured wants and needs? Are we willing to say No to greed in government, in our economy, in our own standards, to make life better for our children and neighbors? We can either work for a better future or live and die with the consequences.

I don’t have the answer. Do you? 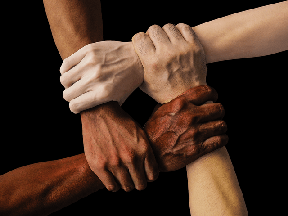